Holy Cross Cemetery is located on Richmond’s north side at First Avenue and Daniel Street. It was founded in 1874 to serve St. Mary’s Catholic Church on East Marshall Street. Until the twentieth century, Holy Cross was known as St. Mary’s Cemetery.

The first Roman Catholic cemetery in the city had been Bishop’s Cemetery, established around 1850 to serve the Irish, English, and French members of St. Peter’s Catholic Church.

The rise in German-speaking immigrants prompted the creation of St. Mary’s, the second parish in the city, in the 1840s. With the growth of this community over the next several decades, the parish’s patrons, the Benedictine Society of Westmoreland County, Pennsylvania, purchased 10.5 acres to establish a cemetery for its purposes on land not far from Bishop’s Cemetery, the Barton Heights Cemeteries, and the city cemeteries near Bacon’s Quarter Branch.

Upon the cemetery’s opening, provisions were made to reinter there the remains of dozens of parishioners previously laid to rest in Shockoe Hill Cemetery or Bishop’s Cemetery.  The cemetery’s design featured gridded family sections, highlighted by an octagonal chapel flanked by separate sections on each side for the burial of priests and nuns, respectively. Burial certificates for the “Grave-Yard of the German St. Mary’s Roman Catholic Church” stipulated that plot owners had “no right to erect tombs or monuments with emblems, signs or inscriptions on them, inconsistent with Catholic usages, or disapproved by the Pastor of said St. Mary’s Church.”

The cemetery was consecrated by then-Bishop James Gibbons on November 2, 1874, All Soul’s Day, accompanied by a large procession. The Richmond Daily Dispatch observed that “The demonstration was one of the largest ever participated in by the Catholics of Richmond, the display being decidedly creditable. The societies turned out with full ranks, and with their handsome regalia and elegant banner, together with two bands of music—Voelker’s and Kessnich’s—made a very imposing display.” Subsequently, traditional memorial services would be held in the cemetery each November to observe All Saints’ Day.

By the first decades of the twentieth century, membership in St. Mary’s parish had declined and the cemetery shifted to accommodate Catholics of all area parishes. A new name, Holy Cross Cemetery, came into usage in 1924 to reflect this shift, and the cemetery’s managers had to find a new model for financial support. Additional land was added to the cemetery, which would ultimately total nearly 14 acres.

In 1931, Agnes Sitterding, whose family had long been associated with the cemetery’s operations, donated funding for the construction of a formal brick wall and massive gates surrounding the property. She and the cemetery association also commissioned renowned landscape architect Charles Gilette for an upgraded landscape plan.

In 1972, the cemetery received the remains of approximately 137 burials removed from Bishop’s Cemetery/St. Joseph’s, prior to the incorporation of that property into Whitcomb Court. 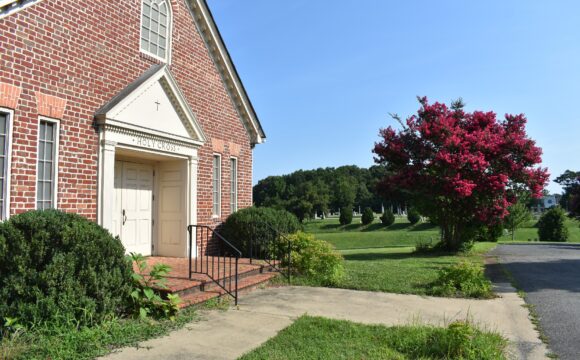 A chapel and administrative building was added in the center of Holy Cross cemetery in 1988, replacing the older octagonal chapel. The cemetery continues to be cared for by a dedicated Board of Directors, attentive to the site’s history.