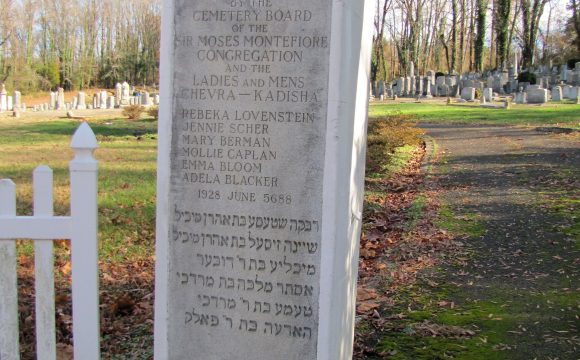 Sir Moses Montefiore Cemetery was founded in 1886 by orthodox Jewish immigrants from Russia, a group whose arrival marked the third major phase in Jewish community building in the United States. These eastern Europeans tended not to assimilate into the congregations established earlier such as Richmond’s German-oriented Beth Ahabah or the older, Sephardic-oriented Beth Shalome, both of which identified with the city’s Hebrew Cemetery. So when the new Sir Moses Montefiore congregation settled into its own quarters in the east end of town, it purchased a plot of land for its cemetery on what became Jennie Scher Road (named after a philanthropic member) on the east side of Gillie Creek.

In 1928, forty years after its opening, the congregation’s cemetery board and chevra kadisha raised a large gateway across its entrance. Around that time, a small storage building/activity hall was built onsite.

Today the cemetery holds over one thousand burials, arranged in tight rows terraced up the hillside. Some of the graves feature porcelain photographic plates, showing portraits of the deceased.

Sir Moses Montefiore cemetery still has a fair amount of land remaining for burials. It is currently managed by a board affiliated with Keneseth Beth Israel in Richmond’s west end. Most of its burials continue to follow orthodox traditions, including plain coffins and hand-dug graves.